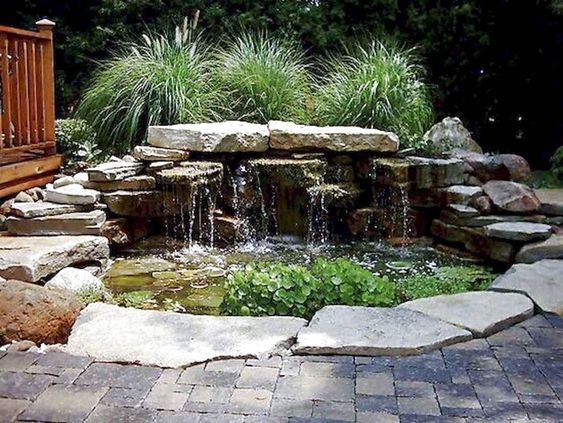 A waterfall is definitely a beautiful water feature that doesn’t only look aesthetically pleasing but also has a relaxing effect from its stream sound. There are also some variations on how to build a waterfall as a complementary feature for example in a swimming pool and pond. However, you can just simply build a waterfall alone and it still looks stunning and a good addition for your backyard.

To give you an ultimate reference about a waterfall to use in your backyard, below we’ve compiled dozens of backyard waterfall ideas that will make you mesmerized!

If you want to make it obvious that you have a waterfall, this idea is a great one to show it off to the coming guest. You just have to get a special spot and dedicate it for the waterfall. To make it looks more unique, instead of building it in a wall or other surface, make it pours from a wooden pillar. You can also make a wooden patio and gravels in the center for the water flow instead of another water feature likee pond.

You can refer to this idea if you like to combine it with another water feature like a pond. Though this natural pond is small, it still blends well with the waterfall with the same simple design. This natural pond and waterfall which are made of stones look really good for the backyard. Other decorations that you might want to use is placing some greeneries around the pond and waterfall.

Backyard Waterfall Ideas: Do It Yourself

If you are the type of person who loves to do everything by yourself, you might want to try this idea. You can make a waterfall that is built in the corner on a sturdy surface like a fence made of concrete or wood cedar. To create this waterfall, you would need stacks of stones, greeneries or vines for the decoration. To make it looks more captivating, make a tiered style waterfall that consists of two or more tiers based on your taste.

So, how do you think about those ideas? Aren’t they look beautiful and mesmerizing and go well with the outdoor atmosphere? Adding a waterfall can be a good addition and even becomes a focal point in your backyard which makes it looks fresher and calming. Since a backyard is usually used to relax while enjoying the fresh air, adding another relaxing feature will never disappoint you.

Say goodbye to your monotone and plain backyard and start adding a natural feature to beautify your backyard now!