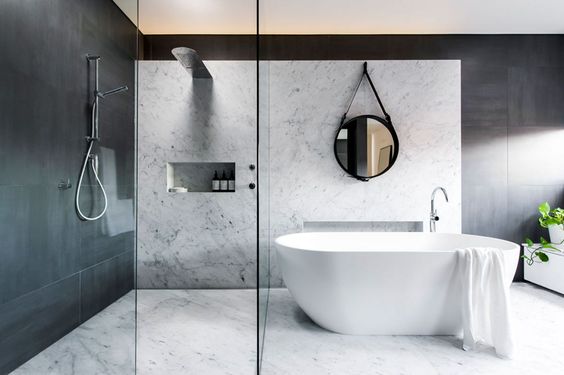 A minimalist design will never fade away and will always have its own enthusiast. No matter what interior design that currently trending, this particular design will still trending among people. It’s probably because this interior design has simplicity as the main point. Of course, simplicity in this context doesn’t only refer to a small space but also a simple arrangement that makes a room looks neat and more organized.

Don't miss out on this: 16,000 DIY woodworking plans with step-by-step instructions and detailed photos- Super Fun and Super Easy

To give you a closer look at the minimalist bathroom, we have prepared some ideas bellow just for you!

Gray can be an alternative color to use and create a minimalist look for a bathroom. Use any material like tiles or concrete for the gray color. When it comes to the minimalist design, a bathroom is literally just a bathroom. It means that it just has to have a shower and toilet, no more than those two elements. Installing glass as partition can also be a decorative point.

It’s alright if you have a small bathroom because you can still have an astonishing bathroom even without a bathtub. Just like this idea, use the end of the space as a shower area, install glass as partition and use the rest for anything else. One of the most used features is probably a vanity mirror and sink. As for the shower area, instead of using a regular ceiling, use glass to make it clear and let the sunlight enters the room.

Black and white are the two colors that will never disappoint you when it comes to creating a minimalist concept. Use white tiles for the wall to give a natural texture so you don’t need to add other decor items. Same as the wall, use tiles for the floor but with a different color to make a contrast but still in the same minimalist concept. If you like a bathtub, you can install a small and simple bathtub, again, with the same color.

Find out: The *EASIEST* way to start your DIY woodworking projects, with diagrams and complete instructions

Choosing a minimalist concept can be an alternative choice if you love simplicity. With this concept, you can make a cozy bathroom that doesn’t only look stylish but also functional. A minimalist bathroom only contains main stuff like toilet, shower, sink, and probably vanity mirror. If you like to have a bathtub, as long as you have enough space, just do it!

Just pick a minimalist bathroom idea that suits your taste and needs, and start making over your own bathroom now!