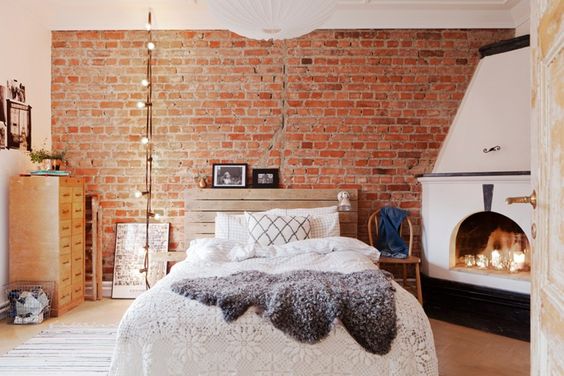 There are various interior designs that you can find and choose when you want to create your own dream room. Each interior design gives a different atmosphere and final look to the room so no wonder that some homeowners take their time when choosing a concept. Not only for the general concept but this also applies to a bedroom.

As you may have known that there’s an interior concept that will make your room looks sophisticated and modern, it’s the industrial concept. An industrial concept mostly focuses on raw or rough materials like metal, steel, exposed brick walls, uncovered pipes, concrete, unfinished floor, woods, etc.

Of course, this concept might be difficult to achieve and also not everyone’s cup of tea as it looks messy and unorganized. But, yes, that’s the point of industrial concept. Just let them as they are, no need a heavy correction or ‘makeup’, keep them natural.

To give you some reference, we’ve prepared some fancy industrial bedroom ideas below just for you!

One of the characteristics of an industrial concept is letting the surrounding looks unfinished and rough. The ‘unfinished look’ of the concrete that dominates the wall and the ceiling is enough to give the industrial concept. Moreover, adding wall decor lighting that exposes its material can be a part of industrial as well.

In this idea, you can see that one of the focal points of an industrial concept is exposing all the materials that you use instead of covering them. First, the wall color that looks quite raw gives one point to the concept. Second, the cable of the pendants that are visible and openly exposed to enhance the concept even more.

Just like shown in this idea that almost the materials are all combined in one place. The unfinished concrete wall and floor, raw wood on the headboard, and exposed pipes around the room are a great combination to achieve an industrial style bedroom.

The bedroom with attic style which is filled with a wooden fixer-upper and exposed brick wall looks somehow exhilarating. Again, this interior concept may look messy for some people but this is one of a simple example of an industrial concept. To give ann extra modern touch, installing a modern chandelier is also good.

An industrial concept may make a bedroom looks messy and unorganized. However, this bedroom with painted exposed brick wall and uncovered pipes as the base of the bulbs makes it looks more attractive and charming. To attract people’s attention from the rough and raw elements, add some decor items either on the wall or next to the bed.

Just keep scrolling to get more amazing ideas of an industrial bedroom!

Well, those are some amazing and inspiring industrial bedroom ideas that can make your bedroom looks modern and fancy. Though it may look odd for some people because of its roughness, you don’t need to worry about it since you will be the one who stays there.

Just choose your favorite industrial bedroom idea that suits your taste and start making your own ‘unfinished’ bedroom look now!